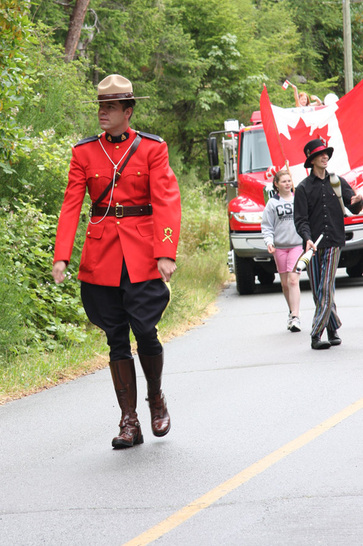 2013
The Jamboree at the North End was a huge success again, and Canada’s birthday was celebrated in fine style by many folk of all ages. It started with a welcoming roadblock where flags, maple leaf tattoos and pins were given to people headed to the hall. Then the traditional parade. Our Mountie was celebrating his first anniversary on the island and marched in his red serge uniform at the head of the parade. He was followed by the shining red firetruck from Hall #1 and youngsters on decorated bikes. There was a floral float – no small job to find enough flowers this cool spring to cover the frame!

From my vantage point in the ice cream booth, I saw families stopping at all the 14 booths to see what’s current with Trails, Classic Cars, Cake decorating, fabulous quilts and needlework and plant sales. The North Hall Firefighters did the usual mouth-watering barbeque with all the fixings. The star entertainer was Pancho, the juggler once again and he drew almost everyone like a magnet in a circle around him when he performed . There was wonderful live music by Good Company, and Paul Gregory on his mouth organ getting folks’ full attention. There were lots of games and prizes for the kids including face-painting and cake decorating and hula hoops, thanks to the Lions’ participation..

I noticed something: there were no cell phones or blackberries, yet everyone seemed to be smiling and having a good time. There were no video games, and the kids were having a ball just hammering nails into a board. Adults also seemed to be wearing smiles as they took in the sights, sounds and smells around the beautiful venue.

I thought Canada had a well- celebrated birthday at the North End Jamboree! Many thanks are owed to the organizers for all their hard work and attention to detail and to the enthusiastic volunteers who made it all possible.